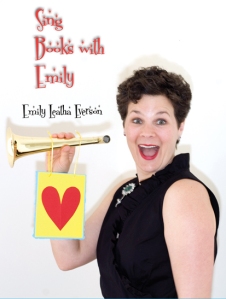 Another great blog from a DC cabaret maven !!!

Emily Leatha Everson has recently found a new performance niche of singing illustrated books to children.  Now Sing Books with Emily is her blog devoted to the subject.

What a terrific resource for parents (or those who know parents) of young children.  Her most recent post has some terrific ideas for holiday themed books.  And hopefully, training young audiences to expect a story with their music will plant the seeds for the next few generations of cabaret-goers.

Thanks to Chris Cochran for alerting me to an interesting NYTimes article about a new set of rare Ella Fitzgerald recordings being released: ”

Yet Verve has just released “Twelve Nights in Hollywood,” a four-CD boxed set of Ella Fitzgerald singing 76 songs at the Crescendo, a small jazz club in Los Angeles, in 1961 and ’62 — and none of it has ever been released until now….They capture the singer in her peak years, and at top form: more relaxed, swinging and adventurous, across a wider span of rhythms and moods, than on the dozens of other albums that hit the bins in her lifetime.”

The NYTimes on Marcovicci’s new Mercer show: “To attend an Andrea Marcovicci cabaret show is to participate in a communal rite in which it is tacitly understood — at least during the duration of the performance — that nothing today can match the magic and romance of old Hollywood and Broadway. An audience of a certain age agrees to gorge retrospectively on the illusions of youth from an era long before the proliferation of viral gossip and reality television. As the ceremonial priestess, Ms. Marcovicci plays a grand, smiling Hollywood hostess — a Loretta Young-like figure — throwing open doors to a rose-colored mythology.”

The NYTimes on the force of nature: “Baby Jane Dexter, a singer with a mighty contralto, makes a persuasive case for uncovering new meanings in songs by wielding lyrics like blunt instruments. There is no beating around the bush for this longtime cabaret performer, whose new show at the Metropolitan Room is aptly named “All About Love” because it covers so many aspects. Her interpretations of everything from Bob Dylan to Rodgers and Hammerstein have the force of body blows.” 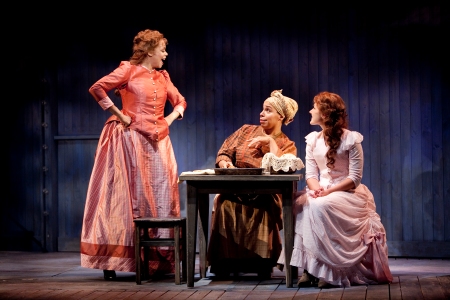 Show Boat starts on the Mississippi in the 1880s, following the exploits of Cap’n Andy and his Show Boat troupe.  Act I concentrates on the courtship of his daughter Magnolia with the wayward but charming Gaylord Ravenal.  Act II shows the dissolution of that marriage and Magnolia’s rise to stardom, and her daughter Kim’s present day (circa 1927) success.  On the way we have detours for miscegenation, the Chicago’s World Fair, desertion, and every variety of show-within-a-show performance.

Legend has it that when Show Boat played its first preview at the National Theater in 1927, it ran four and a half hours.  So seeing how the creative team shapes the available material into a cohesive narrative has been part of what makes this show interesting from day one.  (Actually day two)

Over the river and 82 years later, Signature Theater has mounted a Show Boat directed by Eric Shaeffer that strives to present an intimate version of the epic with reduced cast and trimmed script in a black-box space.  The intimate production of the musical presents some really lovely moments.  Favorites include:

The main victims of this more intimate approach, unsurprisingly, are the moments where the piece trades on spectacle.  Interestingly, the lack of spectacle doesn’t come from the smaller space, but from the reduced population available to fill that space.  And as brilliant a character actor as J. Fred Schiffman is, he felt a little over-taxed in the need to come up with four+ different characters.  Another problem with the more intimate approach came with the Julie-passing-as-white storyline.  Suspension of disbelief is one thing, but it felt like a lot of people along the Mississippi needed to get their eyes checked if they all thought she was purely Anglo.

Another problem with the production that had nothing to do with its scale was the lack of chemistry between Gaylord and Magnolia.  This is a show that relies on literal love at first sight, and the characters do not generate that moment that the relationship needs in order to make sense.  Will Gartshore does bringt an appropriate level of unctuousness to Gaylord Ravenal, but Stephanie Waters (who comes across as a very mature 18 in the first act) seems much too sensible to have anything to do with him, making the relationship seem a bit baffling.

But despite these reservations, I can’t stress how cool it is to see this great classic in the intimate space.  The clarity of the storytelling and the terrific singing create a you-are-there feeling for one of the great works in the American Musical Theater cannon.