A saga of two divas… 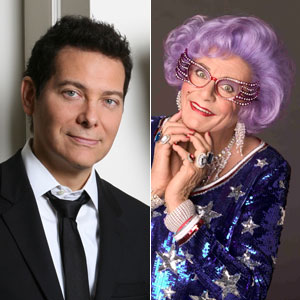 Very dishy column by Michael Riedel about backstage life on the upcoming show, All About Me, starring that non-obvious pairing of Michael Feinstein and Dame Edna:

“Feinstein is miffed that he’s being relegated to the sidelines by Edna’s shenanigans, which are threatening to run away with the show.

“”Michael’s not laughing at the jokes Edna’s making about him,” a source says. “He’s upset that everything she does upstages him.”

As a reminder, the next DC Cabaret Network Open Mic is this Monday, February 22nd.

Note:  This time it will be at the Atlas Theater (not the Warehouse as in the past).

The NYTimes weighs in on the singer doing her Billie Holliday tribute that was recently seen at Strathmore: “Ms. Bridgewater’s singing has only a passing resemblance to Holiday’s scratchy feline sound made within a narrow range of little more than an octave. But her playful dead-on imitation of Holiday singing the opening phrases of “Fine and Mellow” showed that if she had chosen, Ms. Bridgewater could have done the entire show (part of Lincoln Center’s American Songbook series) as an eerie impersonation. But she had a much more ambitious agenda.”

Jeff Blumenkrantz just released a new episode of his songwriting podcast.  And hip-hooray! It features a song called “Valentine” giving singers a very plausible holiday alternative to “My Funny Valentine” (see below).

Also, it seems that Mr. Blumenkrantz  has been working his way through the recipes in Martha Stewart’s Cooking School.  And, of course, he’s been blogging about it.

Q: How many singers does it take to sing My Funny Valentine ?

A Valentine from the NyTimes: Ms. Henry, who gave a Valentine’s weekend performance on Saturday to a packed house at the club, tilts a little more toward jazz. Her singing is free of the flowery melismas that became a ubiquitous pop cliché in the 1990s and threatened to turn singing into a mindless gymnastic exercise. Her sound is also devoid of the kind of scat improvisations that many ambitious jazz singers unfortunately feel obligated to shoehorn into their performances to certify a usually bogus kinship with Ella Fitzgerald.

Making a song an anthem

Fascinating article in the Globe and Mail about the way a musical notion got transofrmed into a heavily-hyped Olympic anthem.