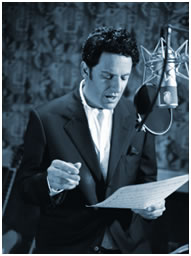 It’s a great line-up of music, the anecdotes are terrific, and you really feel like a guest in his and Jessica Molaskey’s living room.  Plus, listening to it on the Internet provides access to both the song list for the show and the ability to forward or repeat at will.

I wasn’t the only one enthused at the recent outing of Jessica Molaskey and John Pizzarelli at the Kennedy Center.  Here’s a quote from a rare review of a local cabaret performance by the Washington Post: “Molaskey is a Broadway vet currently appearing in the musical drama “Sycamore Trees” at Signature Theatre, and her role on this evening was fitting in, not standing out. (The band is mid-tour — Brazil is behind them, New York and Japan are ahead — and they’re sharp.) Molaskey, a solid singer with a reserved demeanor, and Pizzarelli, whose soft voice gets up and down the scale very well, shared melodies nimbly, and they communed particularly deeply as Molaskey sang Joni Mitchell’s “I Had a King,” accompanied by the low, resonant tones of Pizzarelli’s seven-string.”

I’ll link to my official Cabaret Scenes review, but some additional notes about the evening:

Here’s what they sang:

The Kennedy Center has made it’s announcement about attractions for next season.

Here’s the line-up for the Barbara Cook’s Spotlight series:

Three from the papers…

The Washington Post had a large feature article on John Pizzarelli & Jessica Molaskey’s radio show — “”From high atop Lexington Avenue, I’m John Pizzarelli.” “And I’m Jessica Molaskey.” Each weekly edition of the two-hour “Radio Deluxe” program begins just that way. But after that, it’s anybody’s guess what will be heard next. Terrific music from the Great American Songbook, for sure. Witty stories, certainly. But no consultant-approved playlist and definitely no script. The best jazz is improvised and so, it seems, is the best radio.”  (The online version even has a video interview and song clip.)

The NYTimes profiles Liza Minnelli’s return to the Broadway stage —  ““But I have never felt better in my life. I feel free. I feel happy. I feel completely solid. Calmer and more focused. I understand how intelligent I am.” The words were spoken with Ms. Minnelli’s customary earnest exuberance, instantly instilling belief. But as this veteran performer’s recent highly publicized turnaround made spectacularly clear, a sparkling return to form can ultimately prove to be a fireball presaging another crash landing.”

The New York Times also has an interesting article about Irving Berlin as a songwriter inspired by the current production of Irving Berlin’s White Christmas*: ““There are composers who make you come to them, and there are composers who ask you to meet them halfway,” Mr. Pomahac said. “Of the Big Five, Berlin is the first one to race across the room and grab you by the lapels.” This was often literally true. He liked to sing his songs in the face of his listener, a trait perhaps picked up during his days as a busker, a music plugger and a singing waiter. If he didn’t make an impression, he didn’t make a dime.”  (The elctronic version of the article also features a slideshow)

*That’s the actual official title of the show.  OK, I really wasn’t going to mention Charles Isherwood’s hilarious pan of the show on my blog, but then Davey Brown sent it, too, so I thought people might get a kick out of it.  The money quote: “…as fresh and appealing as a roll of Necco wafers found in a mothballed Christmas stocking.”